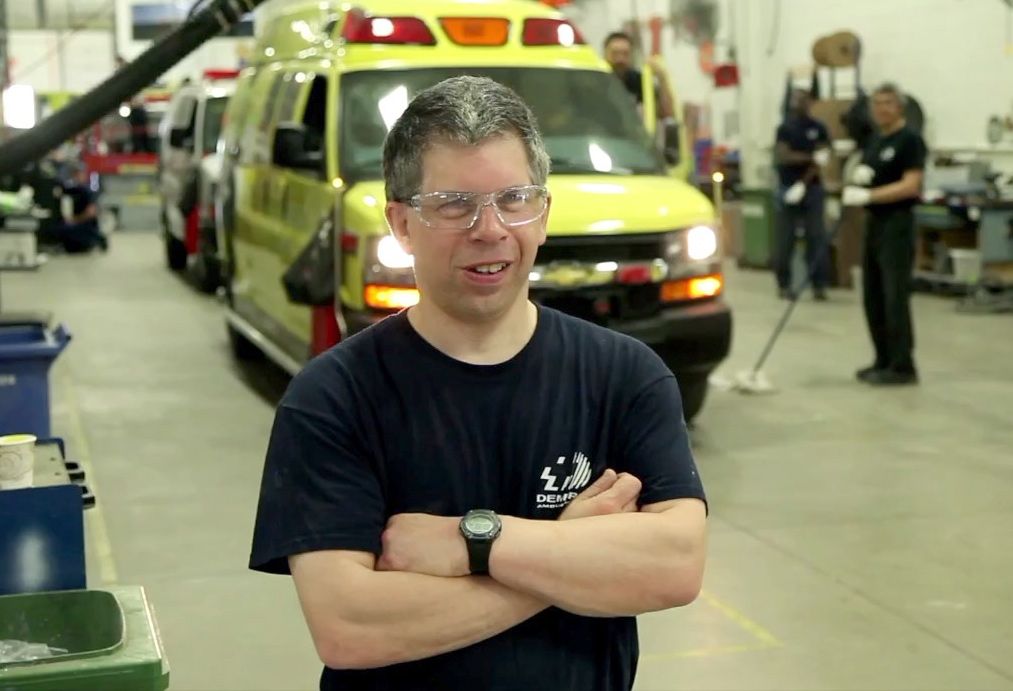 Still yet, there are even more heroes who are behind the scenes but whose roles are — one may think — too small to deserve credit. Today we shine a spotlight on one of those individuals, L'Arche Montérégie’s own Francis Therrien.

Francis grew up surrounded by nature in picturesque Saint-Hyacinthe, sixty kilometres east of Montreal. Throughout the Seventies and Eighties he lived on his family's farm among cows, ducks, dogs and cats. Despite this idyllic upbringing, he decided to join L’Arche in 1990 to be part of a community. Now a core member of the Fleurs de Soleil house in Beloeil, he has incredible friends and a job that he loves, with a mountain and river view out his living room window. He’s also managed to remain in agriculture, working a part-time job at his house’s garden, preparing the compost, turning the soil, mowing the lawn, among other tasks fit for a farmer’s son. But it’s his full-time job in which Francis has been a real lifesaver.

Twelve years ago, Francis landed a position at Demers Ambulance, the oldest continuous ambulance manufacturer in North America. Whether you live in Peterborough, Ontario, Las Vegas, Nevada or somewhere in between, more than likely you’ve seen their emergency medical and fire ambulances racing through your city to respond to life-threatening emergencies. When Francis started at the company he performed custodial duties, cleaning the facility. More recently, he spends five days a week helping the assembly line run smoothly. One can imagine all the boxes of parts that arrive at a leading ambulance manufacturer. Francis walks up and down the assembly line collecting all the empty boxes, sorts them and compresses them. Francis’s role within the company is small, but crucial. He may not be the ambulance’s designer, builder or inspector but his contribution allows everyone else to efficiently manufacture more ambulances, which in turn leads to more incredible life-saving rescues. It’s a team effort, of which Francis is a small but necessary part.

Francis’ contributions to Demers go beyond his official job. For one, he has a way of brightening everyone’s day at work, whether he’s reminding his colleagues of payday or sharing his dreams of winning the lottery. His colleagues became so intrigued by L’Arche that ten of them came for dinner at Francis’s house. Francis was proud to have his work friends and home friends mingle. Though L’Arche and Demers have both been in Boleil for decades, a short drive away from one another down the Richelieu River, it took Francis to bridge the gap between them. Perhaps more core members will follow in Francis’ footsteps by working at Demers (or, after hearing his story, other companies and organizations will consider the benefits of hiring a L’Arche core member). We never know what positive butterfly effect may come from our actions.

Francis has been a long-time believer in the power of small gestures. Even before the 2010 Haiti earthquake, Francis was struck by how dire the living conditions in Haiti could be. L’Arche Montérégie has always been a supporter of L’Arche Haiti but Francis felt compelled to help in his own way. For ten years he’s been collecting cans in support of L’Arche Haiti. Sure, each can only nets 5 cents, but in ten years he’s collected 120,000 cans, sending approximately $6000 to Haiti. His solo initiative grew into a team effort at work; everyone at Demers saves their empty cans for Francis.

How many people does it take to save a life? When somebody falls seriously ill, a newspaper covering the story may feature the person who called 9-1-1 or the first responder. But should we not also thank the ambulance manufacturer? What about the person who provided telecommunications that allowed 9-1-1 to be called, or the barista who made the first responder’s coffee that kept them alert? If we can believe that it takes a village to raise a child, it may very well take a village to save a life. However much you agree with the argument, when we put our best foot forward every day there are bound to be positive ripple effects that stretch far and wide. Even drinking a Dr Pepper can have incredible ripple effects, so long as Francis is around. Your empty can becomes part of a $6000 donation to an organization in Haiti. Yes, it was just one can out of 120,000 cans but each can has its own story.