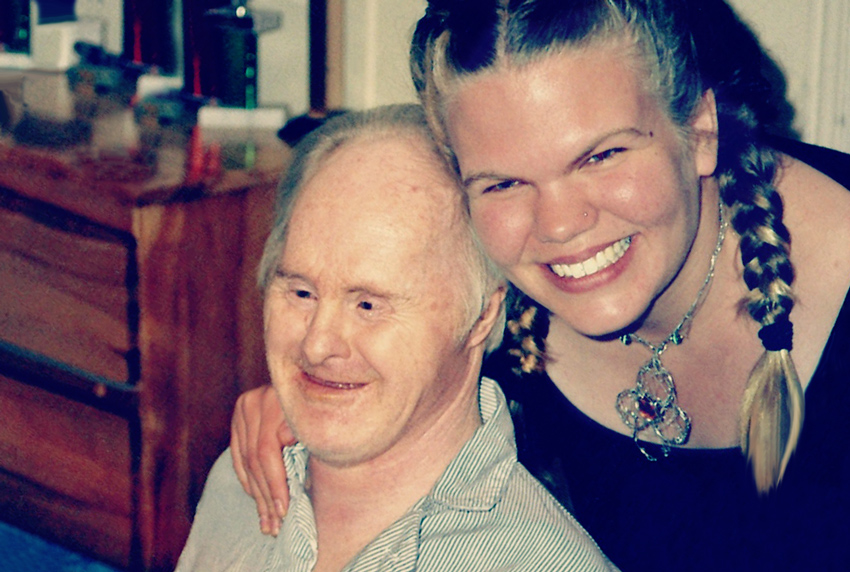 Michael had always been a man of few words, but he was a man of even fewer words by the time I arrived in his L’Arche home in 2001. He had been in the hospital for a long time and, I was told, had been dangerously close to death. But, he had survived and was coming home during my first week in L’Arche.

I remember distinctly the moment Michael was wheeled back through the door of our now shared home. Another assistant in the house made a simple introduction: “Michael, this is Emily. Emily, this is Michael.” Looking at the white-haired, frail looking man with Down syndrome on the stretcher, I wondered, “What have I gotten myself into?” Michael’s eyes met mine. Beholding a young 18-year-old woman away from her Northern Ontario home for the first time, Michael probably wondered the same.

At first, our relationship was a straightforward one of care-giver to care-receiver. I was taught how to care for Michael’s physical needs: how to turn him at night, to dress him in the morning, and to feed him at meal times. Gradually, in the midst of our daily routines, our relationship shifted. In the afternoons, when other assistants had time off, I would take Michael for a walk in the neighbourhood in his wheelchair. Sometimes, we’d walk in silence with Michael occasionally pointing to things saying “oh” or “ah”—the only words he had left—in a surprised tone. Other times, I’d break the silence with talk about how lonely I felt.

While I loved living in community, I was missing my family and friends more than I expected and was grieving after a recent breakup. My losses were very different from the kind of losses Michael was experiencing: loss of his mobility, loss of his ability to care for himself even in the most basic ways, and loss of his ability to communicate. I knew how innocent and small my losses were in comparison to his, yet we found ourselves journeying through them together.

Michael became the center of our shared life at Mountainview House. His routines shaped our routines, and his peaceful presence shaped our peaceful interactions with one another. Despite the frustration and pain he often experienced, Michael was almost always in a good mood. He occupied the head of our table like a kindly grandfather. His smile lit up our family room, where he sat observing the goings-on in the house. Even from his bed, where he had to spend more time than anyone would find comfortable, he would graciously greet caregivers with his open and welcoming eyes.

I remember showing up in Michael’ s room in tears one day over some sadness that I can no longer recall. Michael just let me sit beside him for a long time, his head turned towards me with compassion on his face. He was unable to speak, but he could still communicate love. Over the last couple years of Michael’s earthly life, our friendship grew in that space of quiet understanding.

It was about a year after I had moved out of Mountainview and was working as a live-out assistant that I got the call: Michael was back in the hospital and the doctors did not think he would live long. I visited him as often as I could, and so did many other members of our community. One of the most beautiful things I learned in L’Arche was how to accompany someone in the process of dying. We prayed, sang, told stories, and often just sat in silence around Michael’s bed. No one knew exactly when he would die, but I knew in my heart that I wanted to be there. And I was.

When Michael died, I was sitting by his bedside. What I remember most about when Michael peacefully took his last breath was that almost immediately afterwards, while his body remained, who he was—the spirit of gentle man I had come to know—was gone. I have always been a person of faith, but it was not until that moment that I truly believed in the life of the spirit. The God-given life-force that had made Michael who he was had left his body, destined for the next place on his journey. I simply knew that the wonderful, caring, and perceptive person that Michael was could not cease to be—that he was much, much more than the failing body that had carried him in his last years, which now lay still before me. As Michael moved towards the God who gives life even in death, he brought me part of the way along with him. It was a defining moment for me—a final gift from Michael that oriented my life towards growing and helping others grow in faith.

After my time in L’Arche, I became a hearer, collector, and teller of stories, many of which have been stories about the life of the spirit. I studied and wrote about Victorian women’s autobiography for my PhD, looking specifically at how working-class women articulated their deep spiritual lives amid very challenging conditions. I led a youth group in which we prioritized faith storytelling and engaging in spiritual practices that brought God’s stories alive. I worked in a downtown public library, where people from all walks of life shared their stories with me. Now, in my work with The Presbyterian Church in Canada, I make resources to help people grow closer to God and accompany congregations and leaders as they discern where God is calling them.

In a wonderful and miraculous fashion, it was a man of few words who taught me to see all stories, even the ones that cannot be spoken, as pointing towards a story that is much bigger and more beautiful than the material losses of this life.

Emily Hill was a part of the L’Arche Ottawa community as both a live-in and live-out assistant from 2001-2007. She later earned a PhD from McMaster University in English Literature and is now an Education Program Coordinator for the Presbyterian Church in Canada.