AboutFace, an organization providing supports to individuals with facial differences and their families, as well as public awareness and education to increase understanding and acceptance, recently hosted the Toronto premiere of this powerful film that transforms attitudes about appearance and encourages students to accept themselves and others. It’s about difference and belonging, judgment and inclusion. 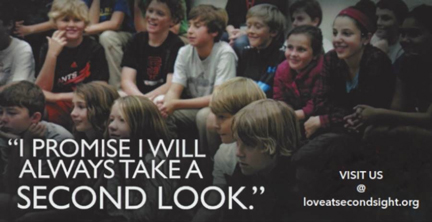 Love at first sight may take the form of an educational video, but it is really a love story, or several rolled up into one warm, funny, challenging package. On one level, it is the story of David Roche and Marlena Blavin, a married couple whose relationship almost never began because – on first sight – she struggled with the way he looks. But as the title suggests, Marlena was able to give David a second look and see more deeply than first appearances.

This film is also a story of the love that David experienced in his family growing up where he was given strong messages about his value and beauty. Through them and the friends and communities where he has found support and acceptance ever since, David claimed his inner beauty, and that was what Marlena would discover on second sight. The nine- and ten-year old students, who are an important part of the film, as they encounter difference and learn some important life lessons from these two gifted teachers, echo this transformation. The film’s website http://www.loveatsecondsight.org/ (where the film is available for sale) expresses it well:

“Facially different David Roche and his lovely wife, Marlena Blavin, share their stories with a spellbound middle-school audience. As they explore themes of self-acceptance (David finds his inner beauty) and accepting others (Marlena moves from revulsion to friendship), the students’ reactions move from discomfort and stunned silence to laughter, delight and engagement. From their faces and feedback, it is clear that their perceptions have quickly shifted as they are encouraged to take that vital second look.”

Following the film, the filmmakers and members of AboutFace talked about their desire to develop a curriculum for middle school aged children and get this package into schools across the country. L’Arche’s on-line educational resources, though usually targeting high school-aged young people, were suggested as a model for this curriculum development. AboutFace “is the only Canadian charitable organization that provides emotional, peer and social support, resources and educational programs to individuals with facial differences and their families. We seek to increase public understanding and acceptance of people living with facial differences through public awareness and education.”