Birds Make Me Think About Freedom

A play inspired by the stories of persons institutionalized for having intellectual disabilities, their families, and friends. 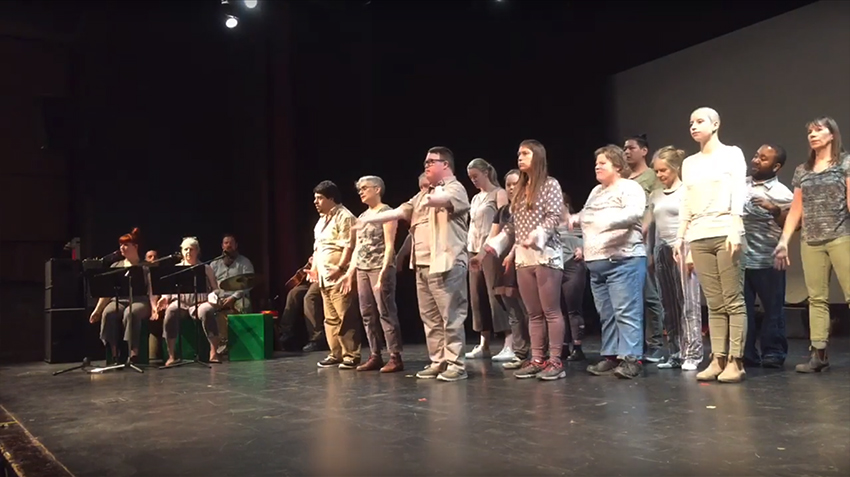 As Birds Make Me Think About Freedom begins, the cast comes onstage. An actor says, “Our play is a journey that takes us to some dark places… but we don’t stay there.” Then he invites the audience to join the company, half of whom have intellectual disabilities, in a simple centering exercise. For most of us, this is theatre unlike anything we’ve seen before, a work of creativity, gentleness, and compassion that invites the audience to come along on a journey that will engage us on every level.

In the words of the creative team, “Birds Make Me Think About Freedom is inspired by the stories of persons institutionalized for having intellectual disabilities, their families, and friends. Institutional survivors have guided the company’s creative process. Following their lead, this production reflects on their stories in song, projections, poetry, and dance. We journey through moments of connection and separation. We go behind the walls of the institution exposing the truth, challenging the system, and honouring all who have gone before us. We hear stories of strength and wisdom. We reflect on freedom ending with a dance of reconnection, a weaving of difference into a colourful whole, a nest of mutual support and interdependence.” 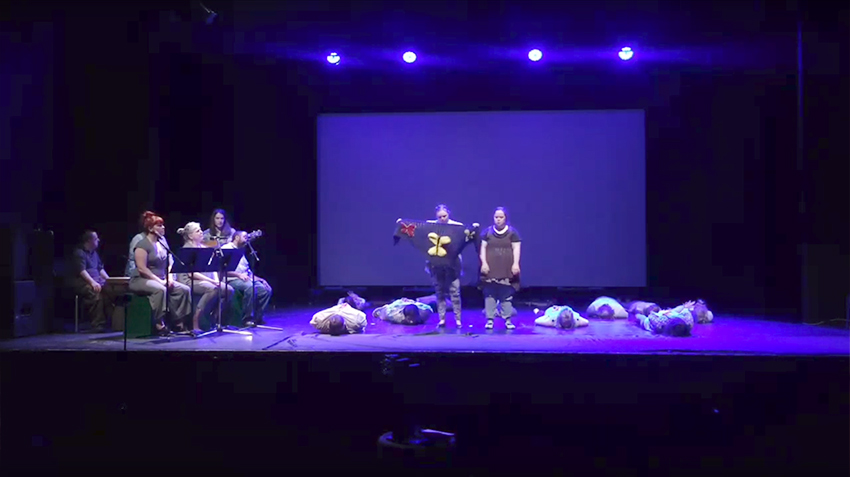 This extraordinary work was created by:

They collaborated with Jumblies Theatre, a local company with national reach, that “makes art in everyday and extraordinary places with, for, and about the people and stories found there.” I’m happy to disclose my bias as I have a support role supervising L’Arche Toronto projects funded by Investing in Justice.

A brief history of this production

After the success of their show, Seasons, at the 2017 Toronto Fringe Festival, Sol Express was invited to return. Birds Make Me Think About Freedom debuted at the 2018 Toronto Fringe Festival where it had a successful run and won Patron’s Pick. One online reviewer wrote, “The play is performed with grace and beauty, and it tells us much about resilience.” (Mooney on Theatre) A reviewer for Now magazine wrote, “Using dance, music and multimedia components, the show skillfully demonstrates the varied ways that the institutionalization movement has impacted the lives of disabled people… Each vignette is powerful, including a somber memorial scene for those who did not survive the institutions, a video interview on freedom, and an exquisite fabric dance.” 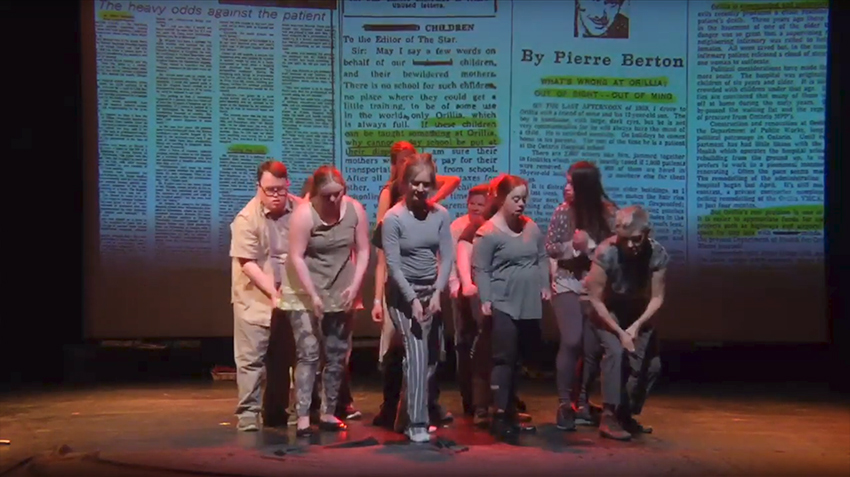 The Fringe debuted a work in progress. Afterwards, the collaborators reflected on the wholly positive and constructive feedback from reviewers and a survey of audience members and performers. As they looked at ways to further develop the play, they were encouraged by the feedback of three groups: survivors who were grateful for a truthful reflection of their experience, audience members who learned about institutions for the first time, and performers with disabilities who spoke about the importance of ensuring that these stories are told.

Work on strengthening the production was made possible by remaining Investing in Justice funds and a grant from the Canada Council for the Arts Explore and Create fund. An invitation by the organizers of Flying to Freedom set the date of the next iteration of the show to March 19, 2019, as part of this commemoration of the 10th anniversary of the closure of the institutions in Ontario.

For those of us who saw the play at the fringe, it’s clear that changes made to this new version, both minor tweaks and significant additions, strengthened its impact and narrative clarity. In particular, stories about persons from indigenous communities who were institutionalized added both powerful reflections on healing, friendship, and resilience, and a link to the horror of the Residential Schools that have so many parallels. The audience of survivors, and their family members, friends, and allies responded enthusiastically. One survivor was heard to say, “How did they get it right?”

The subject of Birds Make Me Think About Freedom is one of the darkest chapters in human history, the development of institutions for persons labeled with what we now call intellectual disability. In words from the court-ordered Apology made by then-premier Kathleen Wynne read in the play, “… these men, women, and children and their families were deeply harmed and continue to bear the scars and the consequences of this time. Their humanity was undermined; they were separated from their families, and robbed of their potential, their comfort, their safety, and their dignity.” This terrible harm was done by the province in the name of what was “good” for the child, their family, and the community. 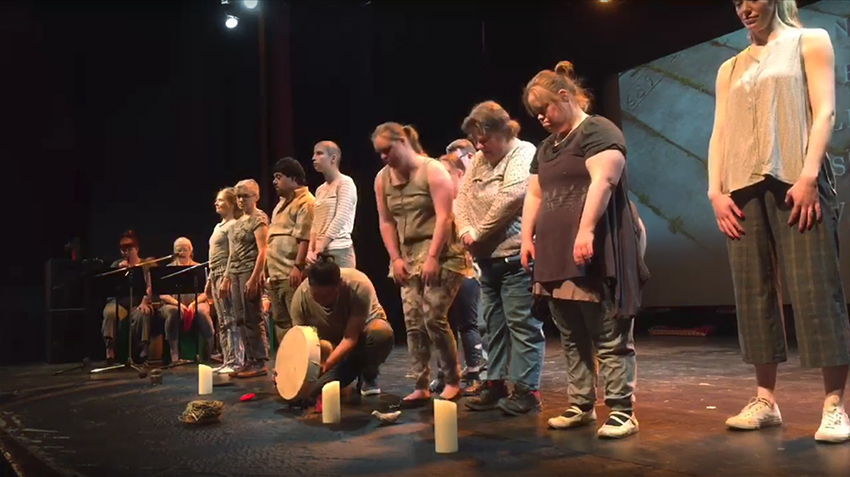 The title comes from the words of a long-term member of L’Arche Toronto who survived 20 years in an institution. He said, “Birds make me think about freedom. They go where they want and don’t have to think about it. It’s a gift in itself because it’s something that doesn’t come overnight. You have to work on it. It’s just there. Like a light.”

His reflection pointed out the importance of the journey of survivors to healing and freedom – even if the road is slow and hard. He and another survivor (neither wishes to be identified) acted as “survivor guides” for the creative team helping them listen to survivors and make choices about what to show on stage.

Listening to the survivor guides led the team to seek guidance from trauma specialists to ensure that the storytelling sessions were safe spaces. They practiced compassion and being gentle with one another. They created rituals, grounding exercises, and circles for sharing their thoughts and feelings. The performers with disabilities responded to the stories with empathy. One said, “That’s sad.” And another, “This could have happened to me.” They listened to many hard stories, yet also to stories of how survivors healed, began to trust people again, discovered their value and made choices for the life they desired. They were moved by the deep wisdom of lived experience of survivors as they grew in freedom.

Community theatre is created by, with, and for a community as a means of engaging issues, promoting action, and building social cohesion. Sol Express embodies these values and practices, working to explore how its members with and without disabilities engage different themes through movement, voice, music, visual art, and various theatrical traditions. Their work showcases the gifts and abilities of the performers – and the program leaders – and expresses diverse ways of knowing and seeing the world. 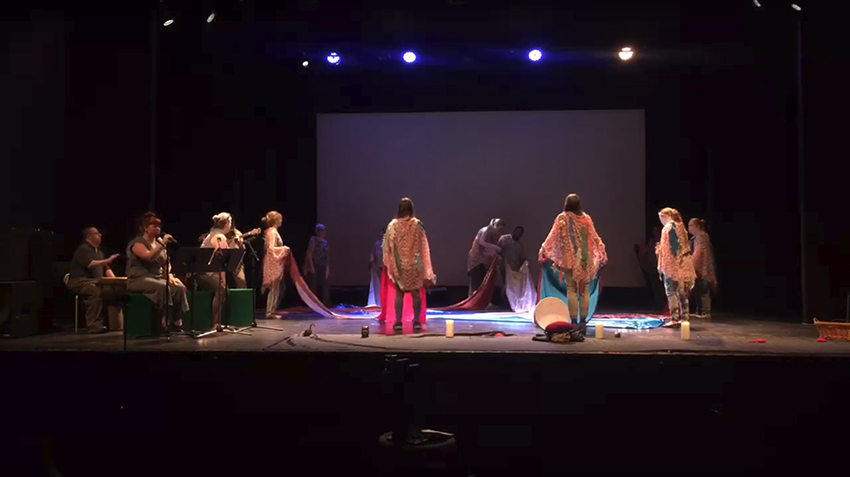 Community Theatre is by design highly collaborative. Sol Express partnered with Victoria who is a researcher, writer, and performer. They collaborated with Jumblies Theatre which has roots in “the British “Community Play”, a form that combines theatre on an epic scale with a philosophy of wholehearted social inclusion and an astonishing capacity for social change.”

Birds Make Me Think About Freedom flows from this tradition. The way the show is told – through diverse creative expression with a diverse cast – witnesses to the power of creating vibrant, inclusive community. The strongest argument against marginalizing people is welcoming them to centre stage, putting a spotlight on their extraordinary gifts and contributions.

For Sol Express, a key moment in the creative process was working together to write the Haiku that ends the play,

Beat strong and steady.
Our hearts and wings together.
Fly with other birds.

They wrote, “These words name our desire for a future where we live together in a world that celebrates difference and interdependence, where each person is valued and belongs.”

This is a message for all of us. If you have the opportunity to see Birds Make Me Think About Freedom, you will face both the worst and the best of what it means to be human. You’ll also see a powerful, imperfect, and hopeful realization of this vision of a more human future. 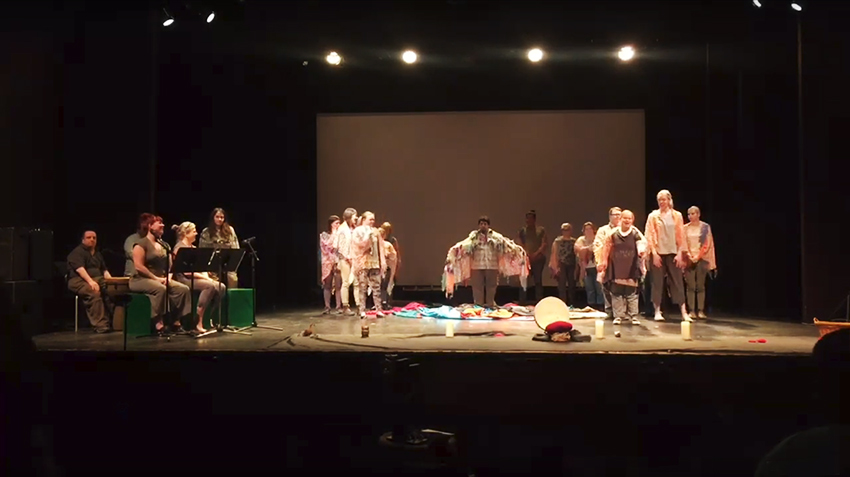 It was late June. A park in Edmonton had been reserved. Food was stacked on picnic tables. Local students of all ages were dressed in taekwondo uniforms, preparing for their annual Break-a-thon. The Break-a-thon is an innovative fundraiser where martial arts students showcase their skills by breaking boards. For each broken board, donations are pledged and raised for L’Arche.
Continue reading