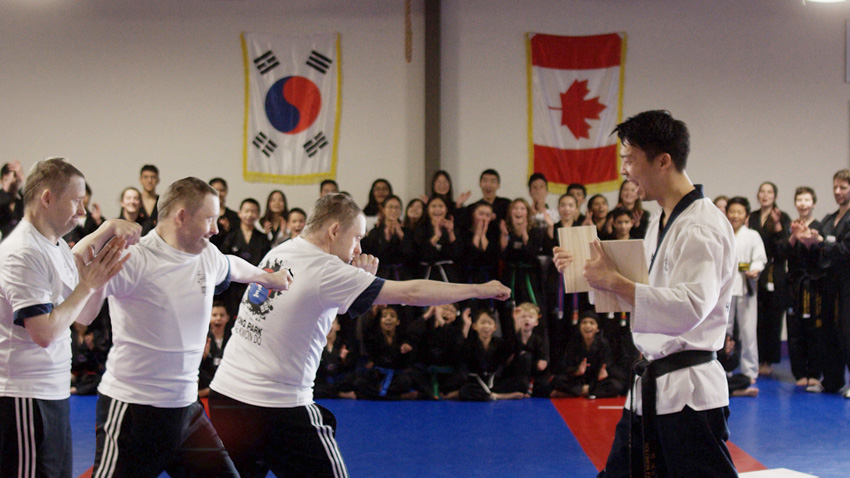 One year at the Break-a-thon, something magical happened. The Grandmaster noticed that one of the L’Arche members—a man named John Sparks with down syndrome--was especially captivated by the board-breaking. “I noticed John was interested,” Grandmaster said. “I saw his eyes and how he clapped for the students. He was the most gung-ho.”

So Grandmaster Park did something unprecedented: “I invited him to break a board.”

Grandmaster Park held the board firmly outstretched and waited for John’s response.

When it’s time to break a board, you really have a choice to make: Am I going to surrender to this feeling of anxiety and nervousness or am I going to accept the challenge or  rise to occasion? Not to mention, you must stand in front of an audience of several hundred people and face the board alone. It’s a true test of courage.

John accepted the challenge. “Grandmaster thought I was ready,” John recalled. “He sensed my heart and soul. I was very young, but that invitation was very special for me.”

John knew his strength. He stepped up to the board, stood before one of the few taekwondo grandmasters in the world, and prepared the strike. John synced his breathing with his movement, then he pinpointed the center of the board, let out a spirited cry, and struck the target.

The audience exploded with applause.

“I struck the board like a cobra,” John said. “And I heard it break under my force, like “KLLANG!”” John chuckled. “I won a Tim Horton’s coffee prize!”

John’s decision to step up created a positive domino effect. Since then, other L’Arche members have stepped forward in large numbers and been coached to break the boards. “At first, the members were afraid,” the Community Leader recalls, “But now they have realized, ‘Oh, I can do that.’” I can put my own strength on display and be resoundingly celebrated for it!

Eight years ago, John’s courage was tested again. He was diagnosed with a rare type of blood cancer. When he received the news, he was faced with the same question: Am I going to surrender from anxiety or am I going to face this obstacle?

Thanks to L’Arche, this is a board that John doesn’t have to face alone. Beyond the hospital visits and chemo treatments, there’s a house full of friends waiting for him to return, cheering him on as he fights the good fight, and driving him to Tim Horton’s when he needs a coffee break.

And throughout this whole process, John has been cheering up his housemates when they’re down, getting them to dance when they’re tired, and offering prayers for them when they’re in need.

At L’Arche, we recognize that no one should face life’s obstacles alone. If you feel the same way, please consider stopping by for dinner (post-COVID, of course), subscribing to our channels (anytime you’d like), donating to our cause (button’s below) or just paying attention to the “boards” people are breaking around you and cheering for them when they “strike it like a cobra!”

We are very pleased to welcome Fiona Williams to the role of New Brunswick Lab Coordinator for our Inclusive Housing Solutions Lab project.

We are pleased to announce that Nancy Lamothe is beginning a new chapter in her life at L’Arche.

We are pleased to announce that Frederico Gauchat will take on the role of Community Leader at L'Arche Outaouais (formerly Agapè).