On February 8, members of L’Arche attended an “in person” session of the accessibility consultation, as several L’Arche folk from other communities had done in their cities. 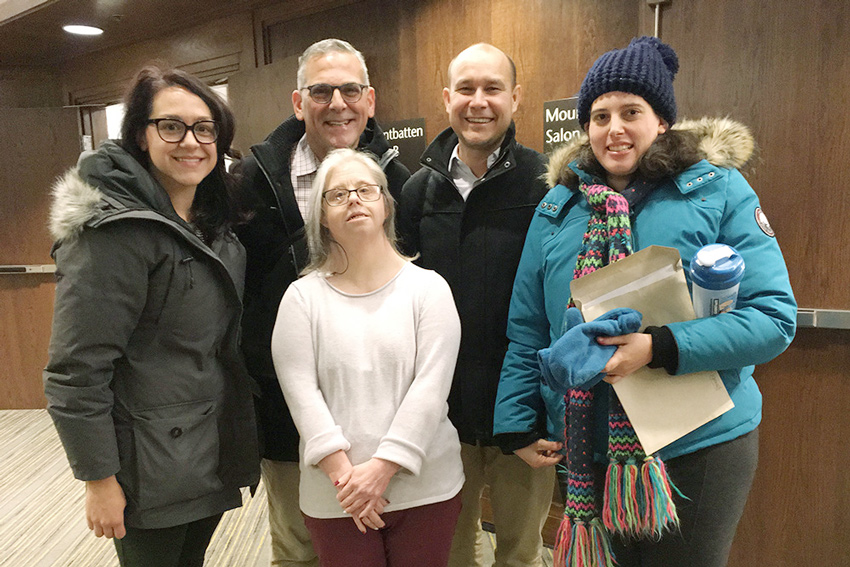 On February 8, Janet Munro, Stacy Gilchrist and I attended an “in person” session of the accessibility consultation, as several L’Arche folk from other communities had done in their cities. I had helped write L’Arche Canada’s submission but this night I was there to support Janet and Stacy, friends with intellectual disabilities, to speak for themselves, to share what was important to them.

I had spoken to Raphael, L’Arche Toronto’s community leader, about who might be a good advocate, and we both thought of Robert Gray. Robert often speaks of his concerns about having access to what he wants for his life. But when I asked him, he said, “No, I’m not interested. Ask Janet and Stacy if they want to go.” I asked them and they said that they would be happy to go with me.

I met with Janet and Stacy to look at the questions for the public discussion:

These are great questions, but were not easy for Janet and Stacy to answer. They could not think of areas in their lives where they were not included and respected. I tried changing the questions around, but I didn’t want to lead them. By the end, I thought, “This could be embarrassing.” I figured that at least they’d be visible even if they had little to say. They were looking forward to an interesting evening – and supper with me.

Naturally, there was a screw up with the van schedule, so we ended up getting to the Chelsea hotel a little late. We were placed in the packed back up room just as things were beginning. The folk from L’Arche Daybreak were in the main room. I recognized many leaders of national and provincial disabilities groups so it didn’t feel second-class. We watched the opening address by our friend David Onley, former Lieutenant Governor of Ontario and leading disabilities advocate, on a large video screen. He named his definition of accessibility as “all that which allows a person to reach their full potential” and to participate as full citizens. “Yes,” I agreed. Then David went on to speak of employment as a means for people to reach their full potential, and I felt a bit more conflicted.

The courage to speak up

The consultation leaders in our room explained the rules – when there number was called, each person could speak for up to 6 minutes. “Who would like a turn to speak?” Immediately, Stacy’s hand shot up and she received the number “10.” Janet was happy to let Stacy speak. The first speakers spoke from prepared texts and filled their time with issues and concerns. One was a lawyer who spoke of issues facing blind people in the manner of a legal brief. It was very interesting and very formal. So formal that I actually grew calm – whatever Stacy added, at least it would be personal. When they called “ten,” her hand shot up again and they brought her the microphone. Stacy spoke clearly and deliberately, “Dore Ann Bartram is in a wheelchair.” I leaned in and said, “That’s right, Dore Ann uses a wheelchair. Can you tell everyone who Dore Ann is?” She said, “I live with Dore Ann. Dore Ann uses a wheelchair.” And with that she handed me the mike.

I said, “Stacy and I live in the L’Arche community in Toronto. Stacy decided to speak not for herself but for her housemate, who uses a wheelchair, does not use much verbal communication, and has complex support needs. I don’t want to put words in Stacy’s mouth, but I can say that we found this process and the questions hard, but for Dore Ann it wasn’t possible to participate at all. I love the definition of accessibility that David Onley shared and we fully support the focus on work for those who are able – such as Stacy and Janet. But we are concerned about people who might be left behind, people like Dore Ann, who will not reach their full potential through paid employment. How can we support people with more complex support needs, at the end of the autism spectrum or with significant psychiatric disabilities, to reach their potential, to participate fully and contribute their gifts?”

After over an hour, there was finally a break. A mother and her son, the only other person there I recognized as having an intellectual disability, came up to us. The mum thanked Stacy, “I couldn’t have spoken in a room like this, but we just needed to be here. You said what needed to be said.” We invited them to come visit us some day soon.

In the hall, we found the Daybreak group and heard that Courtney had also spoken about her concerns and had taken a photo with David Onley. Most of that group needed to get on the road, and we agreed that we’d heard as much as we could handle. Debbie was able to join us, and we went downstairs to enjoy a nice meal. We celebrated being part of this historic dialogue, together creating a world where everyone belongs.

Our vision of inclusion and belonging

When communities welcome the contributions of persons with intellectual and other disabilities, they thrive, and we all benefit from a more vibrant, creative, and compassionate society.

L’Arche was founded to be a safe place where people who are vulnerable and marginalized discover respect and valued belonging. The name L’Arche, after Noah’s ark, was chosen to represent this promise. The current L’Arche logo shows each person with a place in the boat of equal dignity and value. These values are fundamental to the vision and mission of L’Arche for all who participate in our life and for the world.

Our commitment to respect all individuals, to prevent abuse, discrimination and harassment, and to provide support and intervention when required.

The core of the works and message of Jean Vanier is a deep affirmation of life and the recognition that human fragility and suffering are pathways to healing and communion.